2 Guys, a Girl and a Bookstore

From the “Stumbling upon this event was absolutely necessary to my evolution as a human being” files.

Today I met two very incredibly inspirational individuals- Neil Pasricha, the optimistic observer behind 1000awesomethings.com, and the globetrotting Chris Guillebeau of The Art of Non-Conformity. Both are accomplished bloggers, best-selling authors and have helped inspire thousands, if not bazillions of people to take action and lead more fulfilling lives.

Carrying on the successful ‘you’re only as strong as your community’ model of blogs, this stop of Chris’s Unconventional Book Tour at Indigo had both Neil and Chris sharing their stories of personal growth and an informational “Question and Attempted Answers” with an eager audience.

1. Both have a very calm way of being and intense clarity in their eyes, which I would credit in great part to them doing exactly what they love to do with their lives.
2. Both of them had started their blogs at a time when they felt depressed, either by personal events or by world situations.
3. Both realize the power of community and have an attitude of appreciation.
4. They failed, a lot. And kept taking action to move ahead instead of letting the fear win.
3. Cupcakes are the new wine and cheese at book signings.

I had a chance to chat and ask them, “How do you enroll people in what you are blogging about?”. Blogging is a fantastic tool for self expression, and I have come to realize that I want to engage others in a journey of self-awareness and help them feel inspired to live a life they love. Neil gave me some great practical suggestions, in emailing your friends, posting your blog to Facebook and making the marketing effort to spread the word and see what sticks. Chris discussed how he doesn’t recruit his audience, as he has no desire for pressure tactics (completely not his style!), that it’s about connecting with an audience who believes in what your saying.

After asking them, I realized what I was really asking- “How do I believe in my voice?”. It’s so easy to feel like what you have to say has been said before, is clichéd, isn’t of value and won’t be read by anyone but your mom (Hi mom!). It’s part seeking validation from others and also a test to see if you can share your honest and authentic thoughts with the world. To stand up and say “Hey, I have something to say about this” and let it flow straight from your heart. It’s Annie Hall finally stepping up to the mic to sing. It was a powerful breakthrough for me and it’s incredible that I got the chance to uncover it with the help of two people I greatly admire. So thank you 🙂 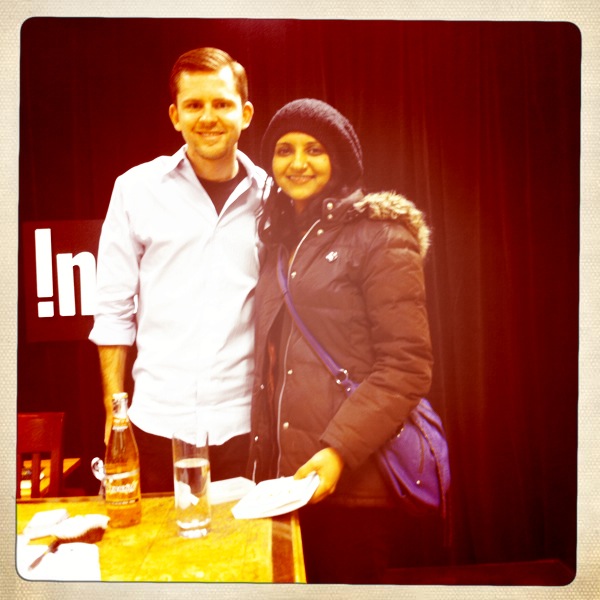 This entry was posted in 1000 Words, Torontonianisms and tagged 1000awesomethings.com, Chris Guillebeau, Indigo, Neil Pasricha, The Art of Non-Conformity, Toronto. Bookmark the permalink.

1 Response to 2 Guys, a Girl and a Bookstore